Bringing you something different this time. Grabbed a few pictures I found around on my computer that I wanted to share with you.

At my POS the sun is always setting. And the new POS graphics make it a stunning experience 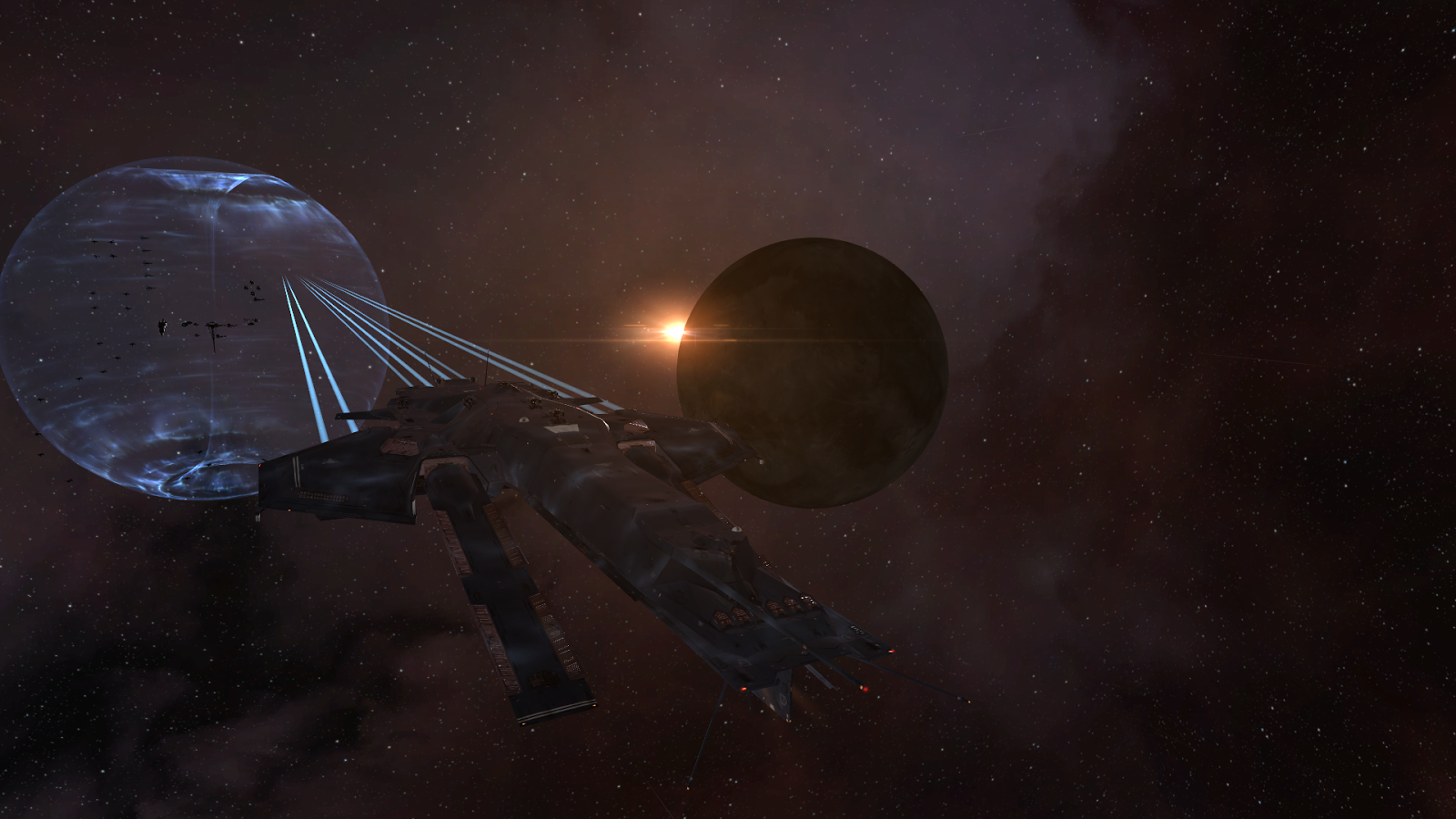 Two captures from a brief visit in Thera some weeks back.

And then some old old pictures I found

For a few weeks now I have been reading through the dev posts about new structures and the changes to sov. Big changes are coming, and we are right now seeing the precursor to those changes. CFC is abandoning Fountain and Cloud Ring. Northern Coalition is abandoning Querios. Renter space almost everywhere is left to themselves mostly. Capitals are rendered useless in the capture of structures and space causing huge shift in how groups and alliances approach the aspect of conquering and holding space. From a lot of the threads it seems that a lot of people from wormholespace dont understand how these changes will affect them so this is my humble attempt at pulling some of the strings and trying to anticipate how some of it will play out. The death of wormholespace? Maybe a bit dramatic. But it will change. Change a lot.

I will divide this section into a few of the core game-play aspects we currently have in wormholespace. Let me start with the big ones first.

The act of kicking someone out of their home. Has been one of the major contributors to the way wormholespace function. Even a scout from Bite Me Inc back in the day could be enough to send an entire alliance into depression and panic. You know what? This will be gone. Completely gone. Evictions as we know them will die with the new structures. And here is why:
So what does this really mean? CCP is shifting the focus from destruction to conquering. If you want to make a name and take over your neighbors assets you need to move in and conquer their system and live there. Not only blap the pos and be gone.

Is this a good change? In my opinion: YES. Very much so. It will definitely encourage more groups to try wormholespace and there will be more focus on fights instead of structures.

I think several of the groups like Hard Knocks Inc and Lazerhawks (and others who enjoy roaming null) already have severely wet themselves when the news about the Entosis link (i) and the new mechanic for capturing sov was released (i).
There are probably a few more aspect of the nullsec - wormholespace relationship that will be affected, but the strict divide that has existed between the two spaces earlier will be a lot more blurred after the summer.

Probably the hottest subject with the most feels thrown around, docking in wormholespace has always been a hot subject whenever brought up. But we also have very little confirmed information about what will apply to wormholespace and what will not. Lets assume at least that the no-local will stay as is (more on this subject later). Will docking hurt wormholespace? Many will say yes, but lets delve a bit deeper into it. What is the difference between a docked or cloaked player in a no-local enviroment? The docked player can change ship without notice. But everyone will see him undock and can react accordingly. Will you engage at the undock? No ofc not. There will be no docking games with the new structures. Why not? Because every docking structure will have defence. You know what this means? Yes docking games will be gone from 0.0 as well. You will no longer be able to sit on a station without taking the risk of being targeted, scrammed, webbed and shot by the structure! Now go back and read that again.

So if you want to be able to camp a station/structure you need a fleet able to tank the structure defense doing full aggro by manually manned guns. Same as with POS currently. So will docking make a big difference in wormholespace? Actually I think not. Will it alter wormholespace? Yes a lot. But players will adapt and new tactics will evolve. But I don't see docking games being a part of it.

Now CCP has given us absolutely NOTHING to indicate this will be in wormholes or not. Personally I would LOVE it. Different concerns have been voiced in regards to market hubs but I think it would both allow different style of gameplay to evolve and also make it easier to actually live in a wormhole.

Again. Little from CCP about this in relation to wormholes but I would love to see it as possible. Especially if it would scale with the classes. To give it short. I want this structure to spawn gas and ore sites that need to be scanned down. Scannable ore sites have been a request since they were moved and this is a perfect opportunity to bring them back. At the same time go ahead and nerf all the ore anoms and belts. That will make this structure very useful in both null and wspace.

GATES AND OBSERVATORY ARRAYS (i)

And here is the elephant in the room. The really big change that will literally change a LOT. Gates in wormholespace? Yes it looks like it :o
I'll start this with a few quotes from the thread:


We are planning on some of the structure to be placed in W-space yes, the exact type and numbers are up to discussion based on the gameplay consequences they are going to have there. It all depends if we feel they're going to negatively impact this area of space or spice up gameplay. (i)

But the most interesting is this:


Interesting points, thanks - however, if possible, we would like to open up as many structures as possible for people not participating in Sovereignty warfare.

Why should we penalize players in high-security space by preventing them to anchor their own gates? If they're willing to pay, face the risk of having them attacked and maintenance of having them, I don't see why it should be for Sovereignty space only.

A large group of players willing to bypass Niarja by building a network of gates around it should be able to do so. Smugglers in low-sec, or FW pilots should be able to use their own gates to get a tactical edge over their opponents.

We may find out later that it may not be wise to do so for whatever design / technical reason, but we'd really like to keep the system as open-ended as possible for now until proven otherwise

Now this deserves some thoughts. Basically what they are saying is that they are changing EVE. Completely. They are changing the way all travel mechanics work. Who can go where etc. We have no clue what this will actually result in especially for wormholespace. But holding a constellation of c4's i.e. may actually become a thing. That alters a lot. A lot. And I'm not sure its a good thing. But it does mean that farming several c5's or c6's in a night will be possible. How you can disrupt the gates will also be a very vital element in their affect. An example could be you are looking at hurting a c5 group that hold 4 wormholes in the same constellation. You start seeding all the wormholes and as they are all gathered farming in one wormhole you attack the gates with entosis link. Now they cant engage you everywhere and using bubbles you can hinder them enough to disconnect two of the systems from the others. Now you can proceed to clear out the disconnected systems and they have to use alts scanners to get a way back in. But with structure loot gone whats really the point of destroying for the sake of destruction? Unless the structure itself gives a 60b killmail? Yeah I can see that being a good enough incentive for a lot of groups. So possible interesting gameplay, but most interesting is the possible validation of the atlas project.

Observatories on the other hand has some interesting uses. Most don't apply to us as it affect showing of statistics on the system map. But the decloaking effect that was teased can be interesting in itself. But we have no clue how that will work. However I don't see any good gameplay contribution coming from it to wormholespace. The cloaky meta is the signature of wormholespace and I don't want to see it gone. So please Fozzie! No decloaking in wormholespace.

This thread is however one I will keep an constant eye on as it evolves.

As the work progress with the new structures it will be interesting to see what comes out of it. I doubt we will have much confirmed before after the June sov patch goes out. But your welcome to surprise me CCP :D

One thing is certain however. The entire game looks like it will be changing. Will it kill wormholespace? No not at all, but it may be the death of wormholespace as we know it today. Ages come and ages go. What was once present pass into history and then into myth.

(check out part 1 here about what static to choose)

This should always be your second choice but its still an important choice.Wormholespace is kinda divided in two. The systems who have a kspace static (c1-3) and those who don't (c4-5). You can also divide between the systems where capitals can transverse (c5-6. Also known as high class) and those where capitals can not enter or leave (c1-4. Also known as low class). Capitals change both pvp and pve a lot. In high class, warping capitals to the anomalies trigger extra sleepers who are worth a lot. In low class this doesn't happen. Also in pvp the tactic known as "dread blapping"(where you use webbing ships to slow down and target paint ships cruiser class and up so the dreads can one-shot them) is common practice in high class. Invasions and evictions is also far more frequent where capitals can leave and enter than where they cant. This will be an interesting change with the new structures that leaves the dreads useless except for additional fighting power. We will have to see how that turns out when the time comes.

This time I have listed the most obvious benefits of each class as I see them, connections (including how much traffic you can expect through your system) and vital considerations for homedefence.

Do you have a different experience with one of these classes? Let me know in the comments below.

The story of our corp: Honestly, We didn't know